Reposted from Showing Up for Racial Justice

Monday October 22nd is the National Day of Actions to Stop Police Brutality, and there are multiple events and actions planned. Please pick at least one to advocate for real oversight and real justice.

MORNING
Press Conference at the “Hall of Justice”, 330 W. Broadway, San Diego, CA 92101 at 9am called by Families and Survivors of police brutality, with Allies committed to Real Community Oversight of Police.

Families of victims of police violence and community support groups are gathering outside the San Diego “Hall of Justice” to petition our government to redress the wrongs inflicted on too many.

No one is above the law. We come to demand justice for Raul Rivera, Alfred Olango, Earl McNeil, Victor Ortega, Sergio Weick, Jonathon Coronel, Frederick Jefferson, and hundreds of other dead or brutalized at the hands of San Diego law enforcement.

We demand an end to the District Attorney’s relentless refusal to properly investigate civilian murders and injuries inflicted by local law enforcement.

We challenge San Diego City Council members to stop sabotaging community oversight of public servants and to sincerely work with residents to create a Commission on Police Practices that is independent, transparent & empowered to counter police brutality.

NOON
Teach-in at San Diego City College, 1313 Park Boulevard 12-4
As part of the Racial Justice Coalition, we invite you to join us as we host a teach in honor of stolen lives as we fight to abolish police brutality in communities of color. We will have several speakers who will be educating us on how to get involved and updates on local cases such as Earl McNeil.
Facebook Event:
Schedule below. 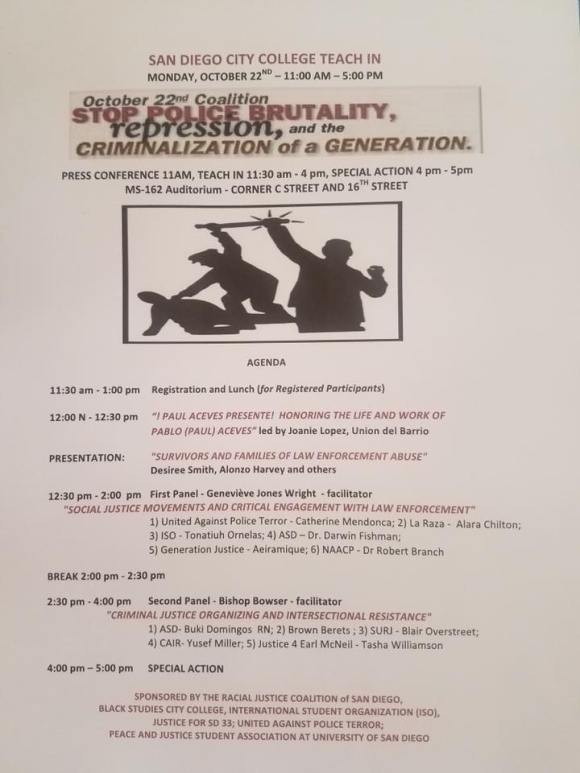 IF YOU CAN VOLUNTEER, PLEASE CONTACT SHOWING UP FOR RACIAL JUSTICE!

Stand with thousands across the country to express our collective outrage, creativity, and resistance in response to the crimes of this system.

4pm Set up and poster making
4:30pm, KYR’s and information distribution
5:30pm Opening Blessing from Tlayolohtli
Rally at City Heights Performance Annex, Speakers and Performance Artists
Candlelight March then have an OLB Action on the I-15 Overpass