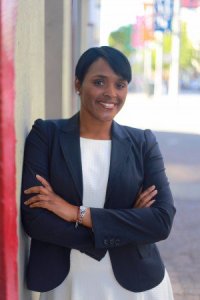 We’re honored to have a Special Guest join us for this month’s meeting, Kimberly Ellis.

Kimberly has worked in private industry, state government and the non-profit sector, developing leaders and successful organizations. In 2009, she was appointed by the Mayor to serve as a Commissioner for the Community Development Commission in the City of Richmond.

As Recording Secretary, Kimberly has brought expertise and experience to the African American Caucus and Democratic Party as a whole. Our state and nation are at a critical point in history. We have an opportunity to reshape the narrative around important issues facing the Black community. As a woman and a mother of two, Kimberly cares deeply about the future of our party, and is ready to help lead it.

At Emerge, the ultimate goal is to increase the number of Democratic women in public office. Kimberly Ellis has decided to lead by example, and is running to be the next Chair of the California Democratic Party.

We close out the year with a meeting to discuss plans for 2017.

Now, more than ever, we need to organize to support each other, our principles and platforms. Only by acting together can we insure equality of opportunity, a level playing field, and fair and equal treatment for all.

Join us for an evening to strengthen and grow our commitment to each other, and against any negative forces we may encounter in the New Year.

Social Time
Members are encouraged to get together from 6:30pm before the meeting starts.
Please bring whatever light drinks/snacks that you’d like to share.

Where
We meet at the Partnership for the Advancement of New Americans – PANA
4089 Fairmount Ave, San Diego, CA 92105 (map)

The building is on the south-east corner of Polk and Fairmount, just north of University. Parking is also available at the adjoining Southern Sudanese and East African Community Centers on Fairmount Ave. Bus routes 7 and 13.

Thanks to all for the warm welcome and great meeting. It was inspiring to hear Kimberly Ellis’ share her activism and optimism about the future direction of the CA Democratic Party. And thanks for the information about how the Party works. I learned a lot. I’m excited about getting involved. Keep up the hard work.