We have a new Club President!

Emily Bonner was elected by unanimous consent on July 20, 2015.

I’m honored to have the chance to lead this club, whose priorities and goals so closely dovetail with my own. I was born and raised here in San Diego, and began my work in politics canvassing for the San Diego County Democratic Party in 2012. Since then I’ve worked for the San Diego and Imperial Counties Labor Council, AFL-CIO during their campaigns on behalf of Myrtle Cole and David Alvarez, the Alliance of Californians for Community Empowerment, the United Domestic Workers, and as an organizer for Sarah Boot for City Council.

Linda Perine established three guiding goals for this club at our inception:

With this framework to lead us, the Democratic Woman’s Club will broadcast the progressive message across San Diego County.

Eva Posner, Communications Coordinator for the San Diego County Democratic Party, gave us details about the protests planned against ALEC on July 22, 2015. [Jackson also helped with her presentation.]

Clubmember Laura Fink spoke on behalf of Toni Atkins office with a nice anecdote about Toni and her motivation for getting involved in politics.

Sarah Saez gave us a dynamic presentation about the 1099 Economy and taxi drivers in San Diego. If you missed it, you can watch her full presentation here:

How can workers make a living wage in a technology driven rush to the bottom?

Service industries are being reinvented by Silicon Valley companies. Customers are connected directly to service providers bypassing traditional means of regulation, examples are Uber and Lyft, two of the best known alternative transportation solutions.Wall Street investors dream of employees all becoming contractors, with limited rights and who furiously compete with each other to offer companies their lowest rates.

In such a world who advocates for proper regulation? Who educates the independent contractors to their rights? Who empowers the drivers? 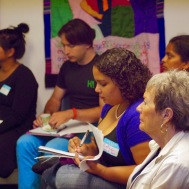 Sarah currently serves as a board member for Mid-City Community Advocacy Network the Foundation for Change and as a delegate of the San Diego and Imperial Counties Central Labor Council where she sits on committees focusing on policy, organizing, and immigration.

Sarah is Program Director for United Taxi Workers of San Diego and was instrumental in leading a historic victory to lift the cap on taxi permits, allowing drivers to become small business owner-operators, helping to transform a group of unorganized, exploited workers into a well-recognized, well-respected force for change.

The strategies and lessons learned are applicable in the fight for a living wage for all workers threatened by the rise of the 1099 economy.

Sarah is running for election in 2016 to the San Diego City Council to represent District 9.

The club endorsed a proposed ‘Resolution calling for the Prohibition of Exploited and Wild Animals in Traveling Circuses and Exhibitions’ presented by clubmember Lori Kern.